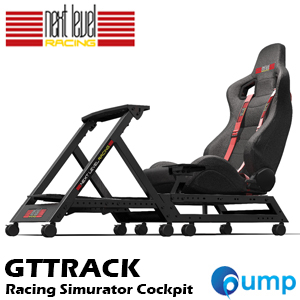 You asked, we listened. We used 8 years of customer feedback to give our customers all the features they wanted on a racing cockpit. The Next Level Racing® GTtrack is the ultimate cockpit for serious sim racers looking for rigidity, complete adjustability and a true race car seating position. The GTtrack’s design was inspired by feedback from professional drivers and some of the world’s fastest eSports drivers to give you every feature required for serious sim racing. The GTtrack is the strongest, most feature-packed cockpit to hit the market, setting a new benchmark for racing simulation.

The complete rigidity of the GTtrack allows it to support direct drive wheels and professional pedal sets as well as being compatible with all major wheels and pedals including Thrustmaster®, Logitech® and Fanatec®

Combining carbon steel with the highest manufacturing methods of laser cutting and robotic welding, the GTtrack is not only built to be strong and rigid but also to be adjustable for all. Users are able to adjust the distance and angle of the pedals to ensure an accurate representation of a race car. The wheel plate allows both height and angle adjustment, completed with seat distance and angle adjustment to ensure an immersive racing experience.